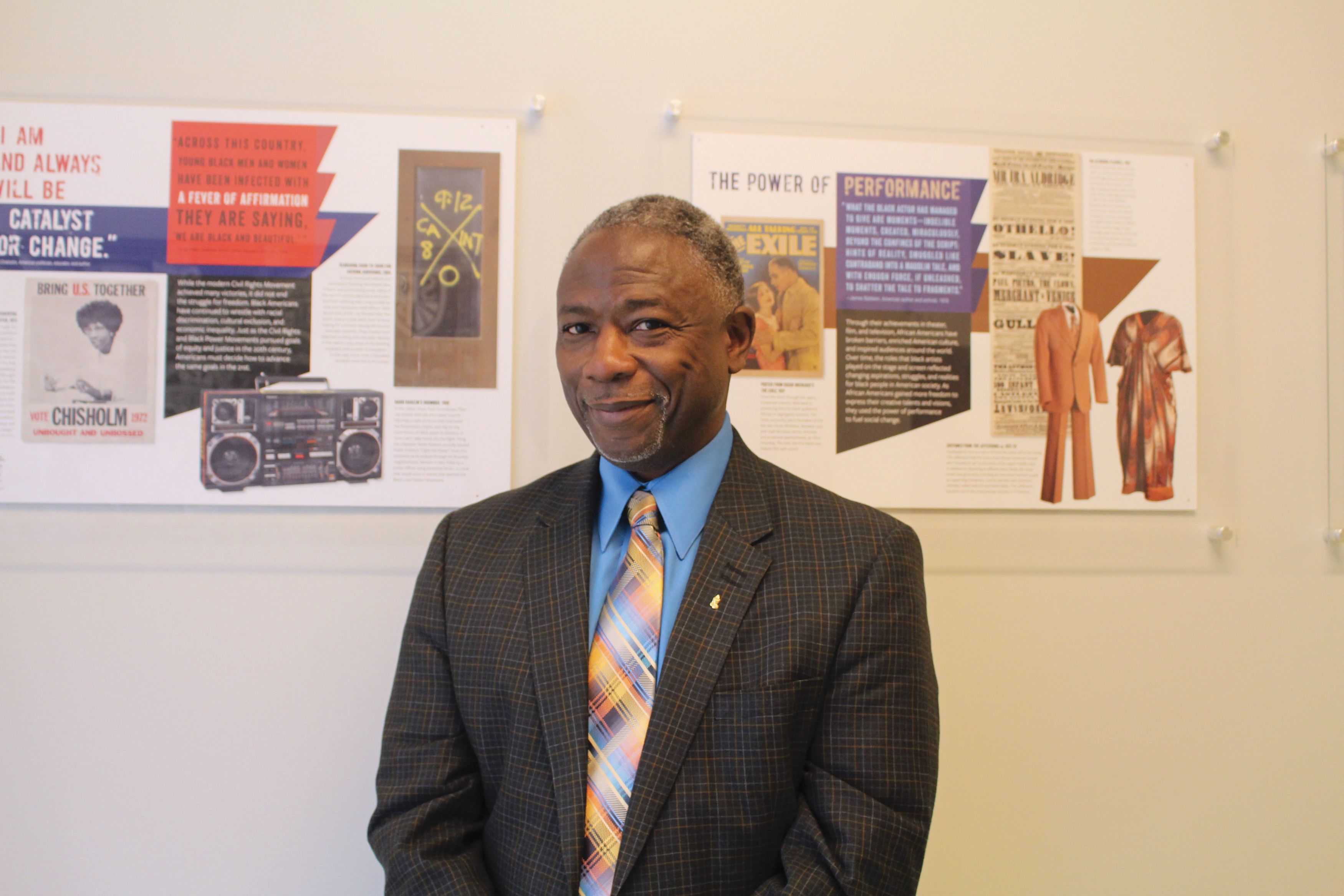 Archive for the "Inspiration" Category

Thank You For Helping Me Learn

An inspiring dialogue with a former student who attended my race relations course at SMU in the mid 1990s.

In the mid 1990's you taught a race relations course at SMU. You were the one and only African American professor I had during my entire university experience, which was 9-years of night school on the GI Bill (a combination of DCCCD and SMU).

I have vivid memories of your class, but especially one particular session. You may recall the classroom was very wide and one wall covered with dry-erase board. You drew a single line from one end to the other, then began marking dates. It looked similar to this:

1865 the Emancipation Proclamation - 246 years of slavery.

It was a revelation - an eye-opening and convicting visual revelation that had never occurred to me (and, I'm sure, other students both black and white).

What you wanted us to recognize and acknowledge then, and even now in 2020, is 86.5% of African American history is marred by slavery and segregation and all the horrors that went with both. Or another way of looking at it, African Americans have lived with the possibility of equal rights for only 54 years - about 13.5% of the entirety of their "American experience."

I have used that revelation many times in the past 20+ years. At all times I have been truthful although it has not always been well received within the unity of family and friends. But, I reasoned, truth is more important than unity.

I am not ashamed of my race but I am ashamed my forefathers kicked the can of racial justice and healing down the road to me. Had they done the right thing it is probable I would not be writing to you now. Nevertheless, I do what I can to make sure my children don't have to, 20+ years from now, duplicate what I am doing here. Time will tell; time and the grace and mercy of The Almighty, if He decides I should live that long.

Thank you for helping me learn, sir.

Great to hear from you

I think back on that classroom and the various lessons quite often. Your reach out is very inspiring because teachers often wonder whether or not our lessons have significant impact that goes generational.

In acknowledging The Oneness of Humankind, the best we can do is sweep around our own front doors To make sure we are living a life that is respectful of God’s humanity and our service to Him. Sort of like Michael Jackson’s song Man in the Mirror.

As to your family history, being embarrassed might be unfair .......... they too were born into a camouflaged, socially-engineered system of inequity, injustice, and hatred compounded by fear.

I don’t know if you watched the movie called The Help. If you did, there is a scene from the movie where the mother of the Writer tells her that she was proud of her for being an upstander. She tells her daughter that courage sometimes has a way of skipping a generation. ..... you are moving your family forward.

Our charge is like the symbol of the Sankofa bird where we have to move forward by looking back over our past.

Your children and mine have some systemic dismantling to take on. It makes me think about a quote from Picasso, who said, “Every act of creation is at first an act of destruction.”

Because of you, and now your children, darkness will not overtake the light. There is more goodness in the world than we give credit to and take comfort in because media overwhelms our perceptions. Keep being the light.

As an educator I still say “a day without learning is a day wasted.” Therefore, I am going to encourage you to watch a Netflix documentary called 13th. After you watch it I would encourage you to watch an old 60 Minutes special called “The Delinquents.” These will provide you with enlightenment over the times we face and the challenges ahead.

Thanks for reaching out - your note is encouraging.

If you are open to it, I would love to share your letter and our exchange with others??? I can remove your identity you, if you were comfortable with that.

Last I would like to ask if you recall the written assignment that you submitted as a part of the course??

Thank you so very much for responding and giving me more learning (I mean that) and encouragement (I mean that too)!

Yes, I have watched "The Help" and the documentary "13th." The latter was in 2018 and shortly before I retired. Truthfully, I probably would not have watched "13th" at that time had I not had an African American boss, Tyrone. He was only the second in my 38 years with AT&T. I was his Chief of Staff, and we would often talk about matters of race. It was about this same time that Jordan Edwards was shot and killed. I was in a conversation about Jordan with another African American colleague of mine, Warren, who lives in Chicago. Warren made an off-handed "matter of fact" reference to coaching his son what to do when pulled over by a police officer, and I stopped him for explanation. I'm sure it is no surprise to you, Warren took his son into the garage, closed the door, and coached him what to do and do when pulled over by the police. I was surprised to hear this, and Warren was surprised I hadn't heard it at all. He asked me how I "coached" my son and daughter. I told him it was about a 30-second conversation at the dinner table one night. It was simply me telling them to be respectful and say "yes sir" and "no sir." That was the end of it and "it" was 180 degrees different, I learned, from some (all?) in the African American community. Another revelation.

Today I watched 60 Minutes' "Delinquents." Before commenting further I will give it a day or two of thought, and in the meantime will probably watch it again. I was not expecting elephants. Without question there are parallels to humanity being inhumane.

I had not heard that quote from Picasso, so thank you for the reference and I plan to use it in a future writing. The first image that came to mind was the destruction of monuments made and erected in honor of the dishonorable. My naïveté will show here because it is only within the past few weeks I learned about Alexander Hamilton Stephens. After reading his 1861 "manifesto" I was shocked to learn there is a monument to Stephens in the U.S. Capitol building (as an aside, I wrote a message to the Capitol for its removal, and told them even Stephens's family wants it removed). In my humble opinion, part of the process of creating a state that effectively recognizes and promotes the equality of all men and women, is removing monuments honoring men and women who neither recognized nor promoted such equality. Those monuments, regardless when they were created and erected, glorified, and still glorify, an era that mandated, by law, racism and segregation. They should all be destroyed.

If memory serves me correctly, I believe the class assignment you asked about was a paper I wrote titled "A Man of Color." Is that right? My mother, God rest her soul, loved that story because it was based in part on her father. He was half-Cherokee, half-white. Mom told me she had once seen a government document (she couldn't recall the exact document) where someone had hand-written my grandfather's race as "A Man of Color." I have his registration card which lists his race as both "White" and "Indian" and his complexion as "Dark" but have not yet found the document Mom described. While the rest of my paper bore no resemblance to anything he did, he was, in fact, a violent and physically abusive alcoholic who hated his own race (I recall there being an academic or medical word for someone who hates his/her own race, but I don't remember the name). Neither I nor my siblings ever met him. Mom and Dad kept him away from us and he died when I was five years old.

As I wrote before, I've never forgotten that evening on campus and I can't overemphasize how deeply it affected me. I drove home that evening in silence pondering a lot of things, not the least of which was how terribly disappointed the Lord must have been in me. All those years silent, but recently not so. This is a good thing. Perhaps the Lord will look at me as the one hired at 5 o'clock in the afternoon and have mercy (Matthew 20). My current (and future) speaking up and speaking out is not necessarily out of guilt, and it is certainly not an effort to earn a heavenly reward (were that even possible would mean no need for Christ). No, I do this because the Lord is no respecter of persons, we are all made in his image, and not only does he expect the same of me (all of us), but it's simply the right thing to do. Humans being humane - to love my neighbor as myself, which is second only to loving God.

Dr. Flowers, I won't write anything that I wouldn't write to family and friends, so if you find value in what I say that could benefit or encourage others, by all means share (I don't mean for that to sound presumptuous). I truly hope to keep our dialogue open, but if at any time it becomes a burden or annoying please let me know. You won't offend me. I tend to go long when writing, and even shortened this email quite a bit (smile).

Praying for us all,

Posted in Inspiration
5 comments
Phallon Tillis says:
Absolutely beautiful and inspiring to read. Thank you for sharing.
M Bennett says:
Dr. Flowers, it must be humbling and rewarding to be made aware of the positive impact that you can make on someones life as an educator.
Wyvonnia Smith-Gorden says:
Loved it!
Karmen Mechelle Payne says:
Dr. Flowers.. I really enjoyed reading about you and Mike's discussion and i can't wait to read more of you'll discussions i wish that i could have been apart of you'll class i just couldn't stop reading about the things that you'll talked about especially when he talked about his grandfather it reminded me of my great grandfather he was a Blackfoot Indian and he hated White people but my Grandmother his daughter taught us not to hate anyone...i could just go on.and on.that's just how much i enjoyed reading you'll discussions..please keep me informed on anymore of class topics.. . Mrs. Karmen M. Payne. Sgt.. U.S. Army Disabled Veteran..
Dr Thamen Evans says:
Greetings Dr. Flowers and Staff, Thanks for sharing such a humble exchange between you and your former college student. Thanks to your Wife and Family for sharing you with all of us through the Years. We are all better because of it!

Frozen Fuel
Unimaginable Danger in Schools
Instant Gratification Is the Enemy of Determination
Man Down
Money, No Mission - The Ultimate Money Meaning